This Is Your (Showaddywaddy) Trial

On February 12th 2016, we were in Leicester to do two shows for the Dave’s Leicester Comedy Festival.

It was the second time we had been invited. The last time was for the Trial of King Richard III when we were to try the whole City and discover whether it was a deserving place to bury the bones of the King found in a car park.

This time, it was Dave Bartram of Showaddywaddy who was in the dock.

The Leicester Mercury wrote an article about the show.

You, the judge: Is Dave Bartram guilty of crimes against music?

A 63-year-old man is due to appear in Leicester this week charged with a string of offences which date back more than 40 years.

He’s not up in court, though, but at Peter Pizzeria, writes Peter Warzynski. The accused is Dave Bartram, formerly of retro rockers Showaddywaddy, who’s on trial for crimes against music. He will appear before comedians – as well as a jury – and vehemently defend himself against his own back catalogue.

And, he says, he’s not sorry for any of them.

“I’m not in any way sorry for my alleged ‘crimes’,” says Dave. “And view the accusations as an outrageous affront. The overriding factor being how happy my band has made countless numbers of people over the years, and something I hear regularly to this very day, perhaps prompting the Daily Telegraph to once describe Showaddywaddy as a ‘recession-friendly band’.” 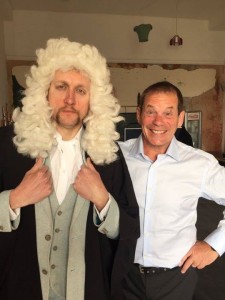 The charges will be revealed on the day, but I can take a punt at what they might include.

Caught somewhere between a pack of fluorescent marker pens and a Teddy Boy street gang, their unique image made them instantly recognisable, even if you don’t know the faces.

I ask one of the show’s performers, Thom Tuck, whether he intends to make Dave answer for all 1970s pop rock fashion in general, which the ‘Wad no doubt had a hand in popularising.

“Wow,” he says. “The whole glam rock thing would be too much.

“I think we’ve got our work cut out with just the band. I’m not sure we’ll have time to add anything else.”

As a bit of added interest, there’s also some audience participation during the mock trial – a chance to see your loved ones hauled up in front of the judge, says Thom.

“We also ask members of the audience to fill in a form about someone they’re with and we pick out a couple of the best charges and get them up on the stand, too.”

It’s a format they’ve used before. Has anyone ever misunderstood the idea and tried to report a real crime?

“Oh yeah,” he says. “A couple of times. Just for stuff like shoplifting. We throw them in the bin.”

Being the good sport he is, Leicester-born Dave has agreed to discuss the impending date with destiny beforehand.

“I have to say I’m a little sceptical in the run-up to the trial,” he says. “But I’ll be approaching the event with a clear conscience, determined to stand my ground against whatever aspersions may be cast, resolved to come out on top and ensure justice is done.

“In truth, I’m viewing the whole thing as just a bit of fun, whichever way the verdict swings, though I’ll certainly give as good as I get if the flak starts flying.”

In the past, the court has put numerous celebs and famous faces on trial – including, last year, the much-maligned Richard III – who, let’s face it, probably wasn’t as misunderstood as people say.

I don’t think anyone is suggesting for one minute that Dave’s crimes are on a par with the former hunchbacked monarch – although he did once, rather unforgivingly, put the bomp, in the “bomp, bomp, bomp”.

But he’ll be on the stand all the same mitigating, pleading and praying for his only means of an acquittal, a legal loophole.

“I have to admit to being flattered at being asked to follow in the footsteps of our great King Richard III,” says Dave. “As far as I’m aware, I don’t appear to have any skeletons lurking in my closet, particularly those of young princes.

“And, I thought ‘why not’, it’s an opportunity to give my second book, All Mapped Out, a good plug for the benefit of the more literate spectators.”

I wonder if shameless self-promotion is one of the charges…

Thom laughs. “We’ll add that to charge sheet,” he says. “We can get one more in.”

Anyway, if Dave is protesting his innocence I’m curious to know who he thinks should be up there in his place.

“As regards musical criminals whose misdeeds may be seen as worse than my own, there are literally thousands, ranging from The Bay City Rollers, David Cassidy, through to a whole host of below-average performers spanning the decades.

“That includes pretty much every X Factor or Britain’s Got Talent winner since both programmes were first aired, Will Young perhaps proving the exception.”

With that in mind, although it’s probably too late, I suggest to Thom freeing the glam rocker and instead establishing a Nuremburg-esque trial for reality and talent show contestants – with the same sentencing powers as the post-war proceedings of 1946.

“That would be great,” he laughs. “But think of the time and the cost.

“Maybe we’ll just use a voodoo doll of Simon Cowell.”

Giving Dave one last desperate chance at mitigation, I ask him to explain his case.

“Many people see fit to overlook the fact that Showaddywaddy’s first four hit singles were all self-penned, as were the majority of album tracks, but I’ll save the gory details for my time in the dock as part of a dogged defence.”

The bench will retire.

You can see a video of Dave Bartram on Trial here.